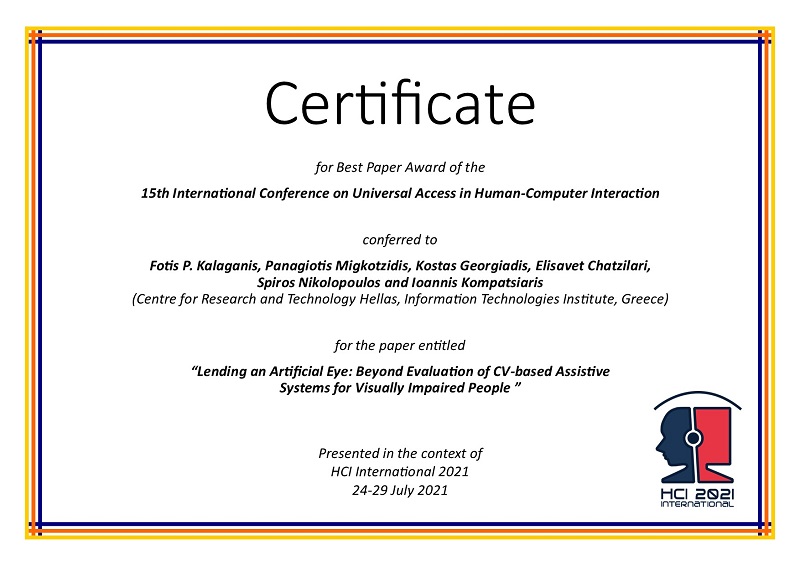 The autonomy of the visually impaired, expressed by their ability to accomplish everyday tasks on their own even when help by others is not available, is of paramount importance. Hence, the rapid growth of computer vision in the last decade has given rise to a large number of assistive systems aiming to help the visually impaired in perceiving the world in a similar way to the seeing ones.

For such a system, a CERTH-ITI team was awarded with the best paper award for “Lending an Artificial Eye: Beyond Evaluation of CV-based Assistive Systems for Visually Impaired People”, which was presented on the 15th International Conference on Universal Access in Human-Computer Interaction, that is now taking place (24-29 July 2021) in Washington DC, USA.

The awarded paper investigates the usability of a hybrid system, named e-Vision, which supports blind people in several daily activities. The e-Vision system was tested by 12 visually impaired people for a month-long pilot study. In this pilot study, the scientific team identified the shortcomings and the limitations that typical computer vision-based practices set to the creation of assistive technologies for the visually impaired. Therefore, the awarded paper also proposes potential remedies capable of overcoming the identified obstacles in existing practices.